An entry-level cycling shoe boasting many features of the company’s top shelf offering … but less than half the price. That’s how we see the Bont Riot Plus, a high quality but relatively low-priced offering from Australian business Bont Cycling.

Pricing generally comes at the end of a review but with a retail tag of around $230, that’s certainly one of the headline features of the updated Riot. Offering many of the attributes of its big brothers the Vaypor and last year's major release the Helix, the updated Riot Plus sure packs a punch, particularly considering its price point.

With a single BOA dial in place of the original Riot’s micro-adjust buckle, the Riot Plus not only deliver the pro-level feel of their more superior siblings - the Vaypor & Helix - but offer a quicker and more efficient closure and tensioning system over the superseded model.

In addition to the BOA dial the Riot Plus feature a velcro tensioner. This is angled to ensure the frontal section of the shoe is evenly wrapped to the foot.

Following factory advice the new shoes were put into a pre-warmed oven of 70 degrees celsius - this was done before fitting the cleats and after sliding out the insole. After 20 minutes in the oven, and after a few minutes of cooling, I fitted the shoes, tightened the velcro then BOA and allowed to shoes to cool to room temperature. The result - fully customised fitting in a $230 cycling shoe!

With the shoes fitted - and the added luxury of brand new compression socks from 2XU just for the occasion, it was onto the bike and out for an undulating 40km reccy ride around the Noosa Classic course on Queensland’s Sunshine Coast.

First thing I noticed was a firm and comfortable shoe that felt more an extension and less an attachment to the foot. At under 300gr in size 44.5, they are noticeably light.

Bont are well known for their research, development and reputation so far as power transfer goes - that is taken as read. One of the first things I noticed about these shoes, particularly as the bitumen curved upward, was the feeling of increased efficiency not just when pushing down on the pedals but noticeably when lifting them as well.

Tough comfort. That could be a way to describe the microfibre upper, a strong yet supple outer layer hardy enough to withstand the rigours of everyday activity yet pliable enough to still feel good after a long and warm session the bike.

Leaning down and giving each BOA dial a tweak just before the climb, the shoes actually felt as comfortable and secure as their big brothers - the premium level Helix (Bicycling Australia are currently also testing a pair of Bont’s premium-level Helix in Black - more on those shortly).

The Riot Plus are not quite on the same level as the Vaypor or particularly the Helix - lacking the leather upper, full carbon sole, revolutionary full foot/single BOA closure system etc, but the Riot’s certainly punch several divisions above their weight.

Turn the shoes over and you’ll see Bont’s intricate cleat alignment markings, a smooth, flush and aero efficient base, and sturdy removable / replaceable heel pads. These, complete with new mounting screws, are available from Bont and dealers as required.

In summary you’ll be getting enormous bang for your buck with the Bont Riot Plus. Purchase wise they’re a no brainer - perfect for the more advanced rider who might ride Fondo’s or race in Vaypor or Helix shoes but looking for a high-performance training shoe. Similarly these would well suit an intermediate rider looking to step into a premium feeling shoe priced at just a few dollars more than the entry-level competition.

Bont’s Riot Plus are available in five different colour combinations -  Mega Crimson/Khaki, Midnight/Mega Crimson, Pearl White/Black, Totally Lime/Charcoal and Black. Available from European size 36 through to 50 with many half size options, they are priced at around $230. For further details visit www.bontcycling.com 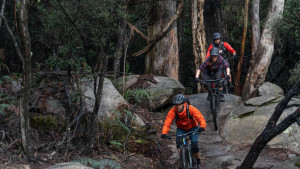 An ode to lockdown.