The Third Saturday in August: When Collie Flowers 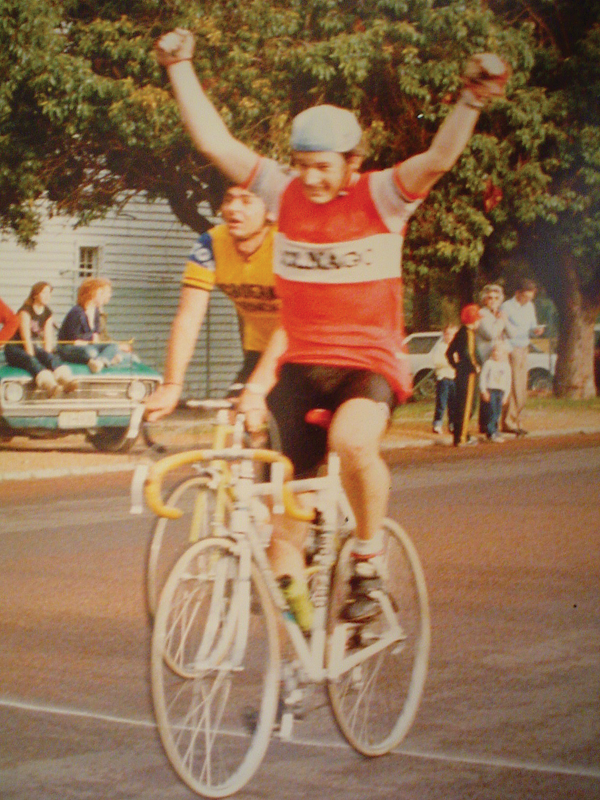 Australian road cycling doesn’t get much more grass roots than a time-honoured country handicap. Save for a single year during the Second World War, one of the longest-running has taken place on the third Saturday of August every year since 1925: the 104km Collie to Donnybrook and Return Cycling Classic. Peter Maniaty spoke with the 2014 race organisers to find out more about this iconic event on the Western Australian cycling calendar.

Their jerseys are on. Their boots are polished. Their socks are hitched up to their knees. The fans are set. As are the scoreboard attendants. All is in readiness for two eighteen-man teams to lock horns in the local South West Football League. But instead of watching the umpire bounce the ball, all eyes are watching the boundary line for the start of a 104km out-and-back bicycle race.

It’s the mid 1950s and the coalfields town of Collie (210km south of Perth and 60km inland from Bunbury) is making the most of its refurbished recreation ground; Aussie Rules field in the centre, newly sealed velodrome on the perimeter. As has become tradition since the once-gravel track was officially re-opened on 31 January 1955, the match will only start once this year’s scratch riders are safely on their way. In fact, such is the significance of the annual Collie to Donnybrook and Return Cycling Classic, the umpire will once again halt proceedings on first sight of the returning riders, typically around two and a half hours later. As one wag pointed out, “that’s a lot of oranges”.

The practice of footballus interruptus in the 1950s is just one of many curious stories shared by 2014 race organisers Melissa Mumme, Darren Coram and Mark Paget of the local Collie Cycling Club. You can sense their passion with every breath. It’s infectious and makes it easy to see why the Collie to Donnybrook and Return Cycling Classic is riding in the slipstream of a popularity wave that saw a record number of entries in 2013 and boasts past participants the calibre of Cameron Myer, Anthony Giacoppo, Mel Hoskins, Henk Vogels, Steele Bishop and even ex-German road champion Judith Arndt. 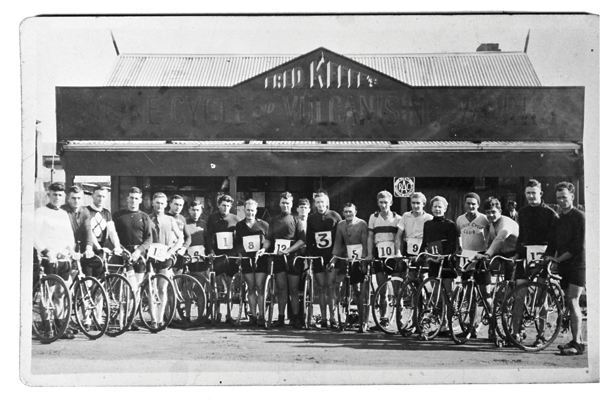 Whilst the race has hosted many household names across the years, a quick glance down the honour roll reveals they rarely win line honours. Only 14 riders have won from scratch in 88 years, and the first scratchie to salute didn’t arrive until 1944 when Joe Casserley won the 18th staging of the race. Somewhat ironically, Casserley also won the 1943 race in a dead heat with George ‘Pud’ Ferris. But on that occasion he started off eight minutes.

Like most corners of Australia, Collie handicappers have historically – if not always popularly – erred on the side of caution by imposing hefty imposts on the region’s best riders, particularly given handicaps can be susceptible to the fine art of sandbagging, something often rife in the weeks and even months preceding a major race. Indeed, when 2009 race winner Russell Brooke (who started off three minutes) was asked to name the funniest moment from the race’s history he replied wryly: “The handicapping each year!”

Of course, it’s the same psychology which condemns the best horses to lug the heaviest saddlebags around Flemington each November. Whilst far from an exact science it – theoretically at least – gives everyone a chance. Besides, watching the two-wheeled greyhounds struggle to reel in the bunnies with juicy head starts makes for gripping roadside entertainment in a nation long renowned for its love of seeing tall poppies popped.

Beyond the vagaries of handicapping, however, the Collie to Donnybrook and Return boasts myriad other tales of underhanded tactics and surprising moments. True or not they’ve become part of race folklore, such as the year when only one of known twin brothers showed up at the start line, with many suggesting the speeding siblings took turns to ride at different stages of the day. “They didn’t win anyway, so I guess it didn’t really matter,” laughs Mark Paget. “Then there was a race I was actually riding in. I witnessed one of the leading bunch get a puncture on the way home. We were flying along, yet somehow he was back with us at the finish line. That raised a few eyebrows.” 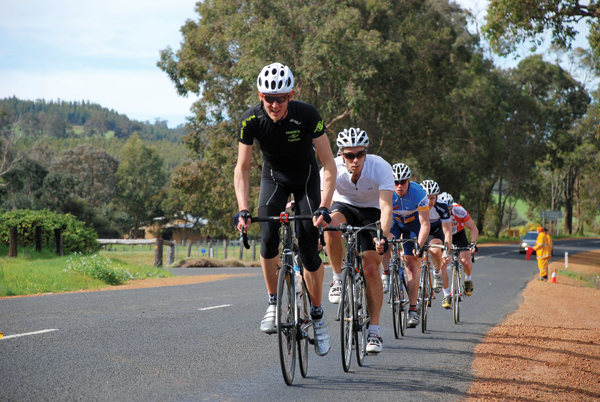 The 2006 race also brought its share of controversy when won by Nathan Dyke off 19 minutes. Dyke had only been able to race after being issued with a day licence at the start in Collie – something several of his vanquished rivals were none too pleased about. Post-race, organisers were quick to suggest Dyke might like to use some of his winnings to get a proper racing licence.

As we continue to talk down memory lane, I wonder if perhaps the race has a more economical nickname like many of its interstate cousins? After all, the ‘Collie to Donnybrook and Return Cycling Classic’ is quite a mouthful. “A nickname? Not really,” says Melissa Mumme before Darren Coram chips in. “For some reason plenty of people insist on calling it the ‘Donnybrook’. Don’t ask me why, though. Donnybrook doesn’t even have a cycling club; we make a U-turn there on the main street each year and that’s about it!”

Talk of U-turns steers us towards an issue that continues to pose very real challenges for Australian road race organisers: traffic management. Unlike several open road events in the eastern states, the Collie Cycling Club has generally enjoyed a smooth relationship with the local constabulary over the years; vital given the importance of rolling road closures, particularly in the face of larger field sizes, increased industrial and farming traffic along the route and a limit currently sitting at around 28 minutes.

“We always have a strong traffic management plan,” says Coram, suggesting it’s a key focus for the committee each year. “I also think we’ve been fortunate that the route has never really changed. It takes in four main roads and two shires who we liaise with directly. Everyone knows the roads and major intersections, and what’s needed (to run the race safely) – riders, organisers, councils and the local police of course.”

“I’ve been to a lot of events around Australia,” adds Mark Paget in a healthy mix of parochialism and experience, “and I reckon we’ve got it down pat. The consistent course each year really does help, we don’t need to change it like some races do.”

Having competed many times over the years, including victory in 1982 and second place in 2011, the now retired Paget, 57, paints a candid picture of the 104km course and what it takes to perform well.

“Honestly? You just belt the crap out of yourself for two and bit hours!” he laughs. “Seriously though, it’s a fairly technical course, starting with about 21km of hills. The climbs aren’t big, but they’re sharp, up to 10% in places. One is about 4km and it’s important you don’t burn too much energy or you’ll be in for a long day afterwards, believe me! After that there’s around 60km of flatter roads. Then the final 20km or so, again it’s pretty undulating, including Lyalls Hill. It’s the most famous climb of the race and usually makes or breaks you as it’s only about 13km from the finish.” It’s also where, as Darren Coram reveals, one of the race’s most famous families is commemorated with a roadside memorial to Bill ‘Toti’ Bonser who launched a solo attack on his way to claiming the 1934 title. “His family have been loyal supporters of the race for generations, they requested a plaque be erected on the spot to mark his win, it’s a great little piece of history,” he says.

For a race that so wholeheartedly embraces the importance of tradition, it comes as little surprise another wonderful touch occurs at the post-race presentation each year – involving a rider who never turns a pedal on the day itself. “After the first finished and fastest time winners are recognised, we also present an award to the person who won the race 50 years ago, or their family members,” says Melissa Mumme. “It was introduced some years back by an old club member, and is now a really important part of the whole day.”

Given the race is in the midst of a resurgence that together with record entry numbers also crowned its first female winner in 2012 when Perth rider Leonie Burford beat the men home, the obvious question is ‘what’s the Collie secret?’ Surely it can’t all be down to fortuitous timing that sees the race held just weeks after the excitement of the Tour de France, nor the international feats of home-grown riders like the Myer brothers, Luke Durbridge and Mel Hoskins?

“It’s always been a popular race, one of the most popular in WA. But it’s still experienced plenty of ups and downs over the years,” says Coram, pointing to the late 1960s as a particularly tough time for the club. “It’s often linked to general mood of the State itself a bit, I think. In recent years things have been pretty good over here.”

Clearly the continued growth in participation numbers across Australia is also helping races like the Collie to Donnybrook and Return, as more metropolitan-based riders look further afield for opportunities – and variety. “Good club riders always want to try different types of races, longer courses,” says Paget. “Given the only place near Perth really suitable for that kind of thing is Kalamunda, the best place to do it is out in the country. Which is good news for Collie, I guess.”

It sure is, Mark.

The 2014 Collie to Donnybrook and Return Cycling Classic takes place on Saturday 16 August. For race and entry details visit colliecycleclub.org.au